John William Scotting is commemorated on the Littleport war memoria. One of the many from the village who gave their lives in the 1914-1918 conflict. Despite being born and raised in Littleport, John was actually serving in the Canadian army at the time of his death on the 8th May 1915.

John had an eventful life, spending time working on the railway in London, working as a miner in Yorkshire, fighting in the Boer war, marrying and having a family, and emigrating to Canada. Before his return to Europe and his death at Ypres.

John was born in January 1881, the son of Charles and Elizabeth (Neé Willimont) Scotting . He was the second child of that name born to them. The first John William was born and died in 1878.

John was baptised at St George’s Littleport on 30th April 1882. One assumes that Charles and Elizabeth delayed the baptism of the second John to see if he survived his first year. This may also contribute to the fact that he gave his date of birth as 23rd Dec 1882 when he signed up for the Canadian Army. Although he may have had other reasons to attempt to confuse the authorities about his identity.

Regardless of his reasons, the 1881 census, taken on 3rd April 1881, has him living as a three month old in Wellington St. His father Charles’s occupation is listed as Farm Labourer, the last of my direct male ancestors to have this occupation. After a long family association with agriculture and the land. Indeed at the time of his death at the age of 75 in 1924, still a Littleport resident, Charles’s occupation is stated on his death certificate as Agricultural Labourer.

By the time of the 1891 census John and his family have moved to Islington, London, living at 7 Lesly St. The ten year old John is recorded as being a scholar. His father and older brother Charles Henry both work on the railway, and it can be assumed from this, that the family moved to find work on the GNR. An occupation that Charles Henry maintained throughout his life, moving to Doncaster around the turn of the century. By the age of 19 John has joined them working on the railway, and gives his occupation as Porter when he joins the army.

In 1901 John was missing from the Census records. This is because he was serving as a private in the 1st (King’s) Dragoons Guards, fighting in the Boer war in South Africa. He joined the Army on the 7th of March 1900, and served in South Africa from the 8th of February 1901 remaining there as part of the garrison after the war. For this service he was awarded The Queen’s South Africa Medal with the following clasps, indicating in which territories and engagements he was involved and the dates- Cape Colony, Orange Free State, Transvaal, South Africa 1901, South Africa 1902. 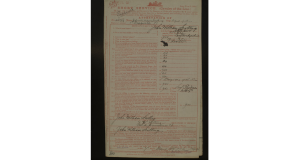 At some point after his return from the Boer war he moved to Doncaster, Yorkshire. Presumably following his older brother Charles Henry. He married Bessie Lilian Douch there in 1909, and their son John Wilmot was born on the 2nd April 1909.

The middle name Wilmot is notable, as it was also my grandfather’s middle name, Charles Wilmot born in Doncaster in 1902. It is assumed that this derives from their Grandmother’s maiden name Willimont.

Sadly, like many veterans, both then and now, John William had problems with drink. In the January 18th 1909 edition of the Yorkshire Telegraph and Star the following report appears-

A triple charge was brought against a man named John William Scotting at the Doncaster Borough Court today. The defendant was charged with being drunk and refusing to quit the Good Woman Inn, with breaking seven panes of glass, doing damage to the amount of 10s, and with assaulting Pc Sinclair.

P.c. Sinclair said that he received the defendant into custody, and on the way to the Police office witness was struck in the mouth.

Defendant said he was so drunk he did not know what he was doing. He had been in Doncaster for twelve months, and was recently discharged from the army with a good character.

No further misdemeanors are reported, and in 1911 at the time of the Census. John was living at No. 4 Castle Ave. Conisboro, Doncaster, Yorkshire, with Bessie and John Wilmot. They are living in a four room house with the Fitzgerald family, and are recorded as visitors. John was working as a Coal Face Filler, a menial job filling coal wagons down the mine.

It’s not clear what happened to the family, but on 17th May 1912, John sailed to Canada on the Tunisian without Bessie and John Wilmot.

Bessie does not appear again in the current records, although the 1921 Census when published may shed more light on her whereabouts, her death or re-marriage are not recorded. John Wilmot however, dies at the age of 21 in 1930 at Loughborough.

The Tunisian has an eventful crossing before arriving in Quebec on 27th May 1912. The Saint John, NB Telegraph Journal reported on 28th may.

“SS Tunisian arrived in Quebec May 27 (1912) after a 20 hour delay. SS
Tunisian left 750 steerage passengers at Grosse Isle in quarantine. A case
of smallpox was discovered on board. Several stewards were also landed
together with provisions. Passengers will have to remain at Grosse Isle for
at least 16 days.”

John William does not appear to have been one of those affected.

On the 8th of May 1915 during the Battle of Frezenberg, John William was listed as missing presumed dead. He was a private in the Princess Patricias’ Canadian Light infantry.

The regimental war diary describes the day in detail-

4 A.M.
Shelling by Germans started chiefly from our right flank which enfladed our fire trenches  this grew more severe by 5.30 & about this time some Germans were noticed coming down hill directly in front of us and we opened rapid fire on them.

Shelling by heavy howitzers using all high Explosives & field guns started again in heavy bombardment both on Fire & Support trenches. Fire trench on right being blown in at several points. A note by orderly to Brigade notified them we were being heavily shelled & asking for reinforcements as our casualties were heavy.

9-30 A.M.
I Lt. Niven went at this time & was in communication with the Officer of K.O.Y.L.I. on our left & Officer of 4th Rifle Bgd. on our right both were suffering heavy casualties from enflade  fire. Bombardment started again particular attention being paid to our Machine Guns all machine guns were buried but two were dug out & mounted again over three times but a shell killed every man on its section

Our Left fire trench (right half) suffered severely & trench was blown in and Machine Gun put out of action. Sergt Scott and few men withdrew to communication trench & held it until it was blown in. Lt. Crawford who was most gallant was severely wounded. Capt. Adamson who had been handing out ammunition was hit in shoulder but continued to work with only one arm useful. R. Sergt Major Fraser was also handing out SAA to support trenches was killed instantly by bullet in head

4 P.M.
Made tour of Support Trenches & found we were out of touch with Regt. on our Left a gap of fifty yards was unoccupied, I placed 8 men in this gap to inform me of happenings there. shortly afterward I was informed that Monmouth Regt. on left of K.O.Y.L.I. had withdrawn to trenches 300 yards in rear and about 5-30 was informed that K.O.Y.L.I. had also withdrawn to same line of trenches

Another attempt by Germans to advance was stopped by our rifle fire although  some reached our trench on right that could not be observed from our support trench but I believe at this time there were none of our men alive at this point.

11.30 P.M.
We were relieved by 3rd K.R.R.C. who gave us assistance to bury our dead that were in Support & Communicating trenches as it was impossible & imprudent to attempt to reach the fire trenches.

From this account we can assume that John was one of the 81 people listed as missing on the day. The majority of whom must have been in the heavily bombed fire trenches that couldn’t be reached in order retrieve and bury the dead.

The battalion was subsequently ordered to withdraw to GHQ in Ypres, and set off at 02.30 AM. On the 9th May.

His death is commemorated on the Ypres (Menin Gate) Memorial (panel 10).

Within the ranks of the PPCLI the Battle is regarded as one of the most important honours on the regimental colours. Historians talk about the death of “The Originals” and the ghosts of Bellewaerde ridge. The Originals being those men who signed up as volunteers in 1914 at the formation of the regiment.

A plaque near the spot in Belgium marks the event:

“Here 8 may 1915 the originals of the Princess Patricia’s Canadian light infantry commanded by their founder Major A.Hamilton Gault D.S.C. held firm and counted not the cost” 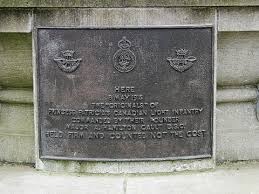 A painting by W.B. Wollen depicting the action hangs in the regimental museum in Calgary.

The battle was part of the larger Second Battle of Ypres. Frezenberg and Bellwaerde Lake

John wasn’t strictly one of “The Originals” as he was transferred in the field to the PPCLI on 1st March 1915 from the 23rd Canadian Infantry Battalion. As part of a draft of 146 officers, NCOs and men who joined the regiment in the trenches at St Eloi in Belgium.

The PPCLI had been in the Ypres area since April, and had a close call on 22nd April when the Germans successfully used a gas weapon for the first time. Accounts say that at five o’clock in the evening a grey green cloud was described floating towards the trenches occupied by the French. The effects were devastating, and within an hour the front line had been abandoned, leaving an 8,000 yard gap in the Ypres defences. The cloud drifted onto the Canadian positions but the line held.